See individual episode analyses of The Mindy Project below: 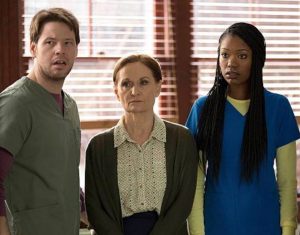 The sitcom's third season does offer a few fleeting images of its nurses as actual health professionals. But mostly, they are physician flunkies. Morgan is clueless and pathetic, Tamra selfish and silly, and Beverly just unhinged...more...

Nurses and The Mindy Project 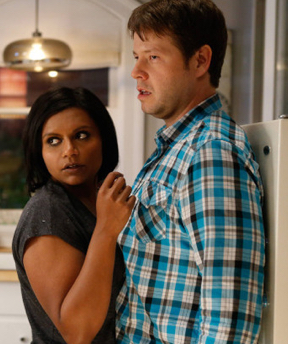 May 2014 – On The Mindy Project (Fox), which focuses on a New York City obstetrics practice, all the characters are odd and silly. But the physicians drive the sitcom's plots and get a certain respect based on their professional status, whereas the nurses tend to be bizarre, ignorant peasants who just provide incidental splashes of comic color. Most episodes in the second season, which ended this month, feature at least some idiocy from nurses Morgan, Tamra, and Beverly. Morgan's exploits include failing to recognize obvious signs that he is eating marijuana cupcakes at a music festival and, at another point, having to be told by one of the physicians that he can't be "promote[d] to doctor." The next most important nurse character is Tamra, who eventually develops a romance with Morgan. We give the show a little credit for having these nurses date each other instead of just pining for physicians. But it's hard to be impressed with Tamra's statement that Morgan has taught her so much about nursing that "I don't go 'Oh God!' when people have really high blood pressure anymore!" Then there is Beverly, a racist freak who was fired as the practice's nurse long ago and now seems to be a kind of office assistant, although it's not clear if she's capable of any useful activity. Random anti-nurse features of the season include physician Mindy taking offense at being mistaken for a nurse, and male physician Jeremy playing "nooky hooky" with two lingerie-clad females, then explaining to a colleague that "my nurses have more tests to run." That reinforces the naughty nurse stereotype, regardless of whether we are supposed to think they are actually nurses. And many of the other plotlines suggest that nurses are  low-skilled physician helpers. On the whole, even though every character is dyfunctional, the nurses really stand out. more...

May 2013 -- By the end of its first season, Mindy Kaling's Fox sitcom The Mindy Project had three recurring nurse characters, giving it almost as many as Showtime's Nurse Jackie had at that time. But that's pretty much where the similarity in nursing portrayals ends. Nurse Jackie's lineup is led by Jackie Peyton, arguably the toughest, most expert major nurse character in U.S. television history, along with her quirky but impressive protégée Zoey Barkow. On Mindy, set at a New York ob-gyn practice, the main nurse character is Morgan Tookers, a good-hearted but demented ex-convict who drives some of the show's more ridiculous plotlines and delivers unintentionally self-mocking lines like "I am not paying $10 to check this $5 coat." There is also Beverly, an older nurse who was initially so hostile, inept, and unhinged that the practice fired her; she reacted by breaking lead character Mindy Lahiri's nose. Still, after Beverly threatened to sue for age discrimination, she was re-hired as an administrative assistant, a job at which she has proved equally incompetent. In one episode, she queries: "Is it offensive to say that I only trust an older white man to give me the news?" And late in the season the show introduced Tamra, a nurse with little evident motivation who initially functioned as an office insult comic reminiscent of Perry Cox from Scrubs, except without Cox's expertise or authority. It's true that the show is irreverent toward the physician characters in romantic and personal matters--they have their foibles and they can act foolishly. But the physicians also display health expertise, and the show does not question their medical competence. Meanwhile, the nurses are peripheral misfits who help advance plots and offer comic diversions but show little if any health knowledge. The Mindy Project feeds the stereotypes that nurses are unskilled dimwits and physician lackeys. The show's executive producers were Mindy Kaling, Michael Spiller, Howard Klein, Matt Warburton, B.J. Novak, and Charles McDougall. see the full analysis... or go straight to our petition!

December 4, 2012 -- Mindy Kaling's new Fox sitcom The Mindy Project, which is set at a small obstetrics practice in New York City, is bad for nursing. Kaling's lookin'-for-love OB-GYN character and the other physicians alone provide skilled care -- by coincidence, Kaling's late mother was an OB-GYN -- while the one minor nurse character Morgan Tookers is a goofy ex-convict. Well-intentioned but ignorant, very odd, and a little scary, Morgan doesn't show much health expertise, and he seems to be based mostly on The Janitor from Scrubs. But wait -- tonight's episode, written by Kaling, also includes a grossly inaccurate attack on midwives! In the main plotline, a holistic midwifery practice led by two New Agey men is "stealing" patients from the traditional OB-GYN practice that Mindy and her two male physician colleagues run. Mindy gets the patients back by telling them that midwives have no significant health training or skill and that only physicians can provide real health care to pregnant women, lies the show presents as hard but inescapable truths. The show's physician characters also caricature the midwives as seductive "charlatans" and "quacks" who are hostile to all "Western medicine," including drugs and vaccines. These seem to be lay midwives, but viewers are likely to apply the show's powerful messages to all midwives (it's not clear if Kaling actually knows that many midwives are nurses with graduate degrees). In fairness, the lead midwife in the episode is a strong, clever character who notes that midwifery predates obstetrics. And we realize that the show mocks everyone for one thing or another; Mindy and her physician colleagues are a bit self-involved and socially maladroit. But the episode never offers any serious criticism of physicians as health providers. And this episode is consistent with the economic and territorial fear some physicians seem to have for advanced practice nurses. The episode may also reflect a reactionary sense that traditional professional and educational hierarchies are under threat. And it is telling that Kaling targets male midwives, even though the vast majority of real midwives are female. Of course, showing that reality might have complicated her gender goals, which involve getting her character the respect of her male physician colleagues. And speaking of reality, in the real world all midwives receive years of health care training. And research shows that the care of certified nurse midwives is at least as good as that of physicians overall. We urge the show to avoid further attacks on nursing and midwifery. more... see the film clips and please join our letter-writing campaign by clicking here!

You can watch The Mindy Project online here. To watch the show on broadcast television, it airs on Mondays on Fox at 9:30 pm / 8:30 Central time.

To send your comments directly to the show's Executive Producers Michael Spiller, Mindy Kaling, Howard Klein, Charles McDougall, and Matt Warburton, please write to them at:

And please copy us on your letters at letters@truthaboutnursing.org. Thank you!

A Few Successes —
We Can Change the Media!

Educate the world that nurses save lives!

Get "Save Lives. Be a Nurse." bumper stickers to share!